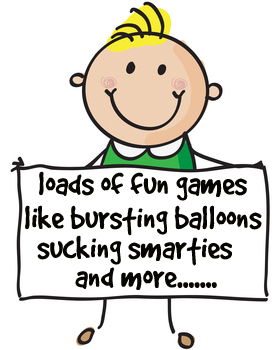 Here are some party games to suit any childs party. You shouldn’t need to worry any more in wondering how to entertain the kids once you’ve done a little planning. Most of the party games we’ve included are easy to set up and involve very little cost and basic materials.

The chances are that not all the children will know each other, so party games are a great way to break the ice and to pass the time. Don’t forget to get a bundle on spot prizes in your local party shop and sure don’t all the kids get a prize in the end 🙂

There is no end of games that you can organise for the 3- 8 or 9 year olds. Don’t worry too much about the under 3’s as they will either be mooching around the existing toys or hanging out of their mothers coats. Older kids do not need to be entertained all the time, although there is no harm in having one or two games in the war cabinet. Remember the weather in this country – there are better days in November than in July.

Be careful with team games, you need to ensure a fair balance or age, size and skill levels in each team. Don’t forget to check out our party ideas section and have a look at our party plan help also.

Suitable for 4 or more children with 1 balloon per person. Pair up the children. Each child has a balloon tied to their left leg. They must try to burst their partners’ balloon using their right leg only.

Or, divide the group into two teams. Tie the balloons to everyone’s ankles. Get them to go once the music starts and watch the teams trying to burst the other team’s balloons first. The team with the last balloon wins. As their balloon’s burst it’s time for that child to sit down – as they will of course!

Suitable for 4 or more children with maybe a few dads bullied into volunteering to be a mummy.  You will need one full toilet roll  per mummy and none of that super cheap stuff as that stuff continuosly breaks durng the mummification process. The mummy volunteers stand up at the front of the crowd, the mummifiers are ready with their toilet paper and then the music starts. The idea is wrap the paper right around the mummy – from head to toe! When the mummification process is over (or song stops, play a second song if there is a lot of paper left)- all the children will vote to see who is wrapped up the best! The next stage of the fun – is getting EVERYONE to rip off all the paper. The children will clean up of course – for  a bribe!

Look for a volunteer wizard to start these party games off. The wizard must say out loud and in his or her best acting voice “I am the Mighty Wizard and I will turn you all into a (get the child to make up this bit – use the imagination) and the best (insert here) will be the next Mighty Wizard. Then put on the music. If it is a dog they are to be, then off they go! And stop the music. The Mighty Wizard picks the winner and hands over the title. The next Mighty Wizard repeats….

They can be anything, a person of any profession, an animal, a flower – the more child abstract the better and then to see what the crowd will come up with!

You will need a straw for each player, bowl for each team an buckets of smarties. Split into teams of even numbers. Pour the Smarties into a bowl for each team and provide each child with a straw. The children must suck a Smartie up out of the bowl using the straw and deposit the Smartie down beside the bowl Set a time limit and the team that has gathered the most Smarties wins. They can all share out the goods.

Get the children into a circle and choose one child (usually the birthday boy/girl) to be the duck.The ducker gets to walk around the circle, tapping (not hitting!) each child on the head and saying wither “duck”, or “goose”. If the ducker says, “duck”, then nothing happens. But if the ducker yells, “Goose!” then the “goosed” child gets up and runs around in an effort to tag the ducker. If the goose cannot catch the ducker, then that child becomes the ducker. If the duck is caught, then he/she has to sit in the “soup” (the middle of the circle) until another ducker is caught.

Let the little ones start a back garden battle and fight against the enemies using water bombs. You will need some water balloons and lots of water for this battle. Divide the players in two teams and give them equal number of deflated water balloons. They have to fill them and throw them towards the opposite team. Remember to offer a treat to those that pick up the most bits of balloons after the battle. There won’t be any winner in this game but the players are sure to love fighting this cool war – errrr, this is probably weather dependant. Maybe we can come up with a Rain Water Battle game.

That’s all for now – we will be adding more.