Punch and Judy and The Grumpy Man 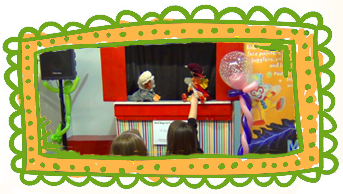 In the days before the single puppeteer operation, my co puppeteer and I were giving our Punch and Judy show some mighty welly. The kids were screaming and yelling and having a ball and we were pushing our panto experience. It was all great fun.

Just as the Policeman was about to nick Robbie the Robber – a most irate and unknown man stuck his head over the playboard, looked down at us and bellowed below –  “Would you EVER stop this INFERNAL racket!”

I looked at the other puppeteer and said  “Errrrrrr, were not that bad. Are we?”

The irate adult continued, “I’m trying to have a nice peaceful afternoon in my own garden and I am unable to – all because of all this noise!!” Ohhhhhhh – the light came on, he lived in one of the posh houses that bordered the party venue grounds.

Now as we were not thinking straight, I answered (in Robbie the Robbers voice – with the puppet turning to look at him) “Ehhhhhh, I tink you better talk to de boss – he’s around the back somewhere…I tink!”

“I’m staying right here, until someone comes to talk to me”. said the man, Robbie replied “Ehhhh OK – he’ll be witcha-inna-minnit”

So, for the next few minutes – Mr Grumpy stood in front of the puppet booth, the kids looking at him and both puppets staying on stage…saying nothing. Although the puppets, “kept looking at their watches”, “scratching their heads” and were eventually brave enough to start “yawning” – behind his back!

These surreal few moments eventually passed, Mr Grumpy moved off the with boss with both puppets stretching the necks following the man as he disappeared!

“Is he gone, boys and girls?” said Robbie the robber,

“Yes, he is” said the boys and girls.

“Oh no he’s not” said the puppets!

Our Punch and Judy Puppet Show

See our Facebook page for more pictures and testimonials.